The First Year and the Rest of Your Life
Movement, Development, and Therapeutic Change 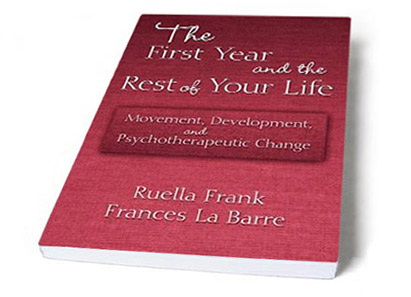 The movement repertoire that develops in the first year of life is a language in itself and conveys desires, intentions and emotions. This early life in motion serves as the root of ongoing nonverbal interaction and later verbal expression – in short, this language remains a key element in communication throughout life.

In their path-breaking book, gestalt therapist Ruella Frank and psychoanalyst Frances La Barre give readers the tools to see and understand the logic of this nonverbal realm. They demonstrate how observations of fundamental movement interactions between babies and parents cue us to co-constructed experiences that underlie psychological development. Numerous clinical vignettes and detailed case studies show how movement observation opens the door to understanding problems that develop in infancy and also those that appear in the continuing nonverbal dimension of adult communication.

Their user-friendly non-verbal lexicon — foundational movement analysis — enhances perception of emerging interactive patterns of parents and their babies, couples, and individual adults within psychotherapy. Clinicians in any setting will find this book to be a masterful application of infant research and movement theory that significantly augments clinical acumen and promotes greater understanding of the nonverbal basis of all relationships.

“Frank and La Barre have drawn upon years of expertise in recognizing the communicative importance of nonverbal behavior. Expanding upon the well-grounded movement perspectives of Laban, Kestenberg, Bainbridge-Cohen, and others, they extend their insights into the realm of parent-infant interaction, and awaken us to critical implications for us as psychotherapists. There are riches here pertaining to parent-infant relationships and to what makes the therapist-patient relationship effective. The bridge between these realms is exquisitely detailed in carefully observed movement interaction.”

“Finally, here is a work that definitively reveals how nonverbal movement inclinations in infancy, developed in the company of significant others, become the implicit core of adult function, still actively part of every lived moment. By elaborating the key movement patterns in all relationships, the authors have created a somatically informed, whole person approach to both psychotherapeutic treatment and educational interventions.”

“The in-depth method of study offered by Ruella Frank and Frances La Barre, foundational movement analysis, is of great value to psychotherapists who focus on interaction and contact, and affords a sharp tool to ground process work in a field perspective.

Going beyond the empirical understanding of nonverbal expression, the authors show how body movements point out the unformulated and pre-reflexive areas of experience. They also demonstrate how feelings, to which psychotherapists are so sensitive, are a 'later-developing aspect of the experience of physical and kinetic elements of interaction,' without falling into the trap of a linear cause-and-effect way of thinking.

Clear, brilliant, and illustrated with clinical examples, this book is a worthy addition to the library not only of psychotherapists, but also parents and caretakers.”

“This fascinating and undeniably important book will do nothing less than widen and reorient your perception of human movement. Reading Frank and La Barre will actually change what you see. And you do see it, too, because the book is packed with marvelous, detailed illustrations.

If you are interested in mother-infant observational studies, the interaction of parent couples, or individual psychotherapy, this is essential reading. Psychotherapists will make discoveries about their patients, themselves, and the interaction that they might never have suspected.

Frank and La Barre's novel observational method, foundational movement analysis, reveals crucial data to be right there in the embodied aspects of clinical relatedness. We are overlooking so much!”